At the age of just 17 Malala Yousafzai is probably the most famous Pakistani in the world today. This blog is an attempt to unravel the mystery that surrounds Malala.

Malala was born on 12/07/1997 to Ziauddin and Toorpekai Yousafzai in Swat, Pakistan. Ziauddin was inspired by Marxist ideology and was active in promoting education for boys and girls in Swat. His deep interest in politics meant that he constantly discussed politics with his children, especially Malala. By the time she was 12 she could discuss politics intelligently and, under persuasion by her father, had given up her earlier wish of becoming a doctor in favour of becoming a politician. 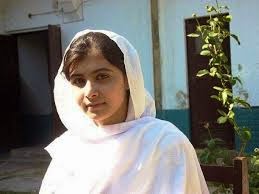 In 2007 Tehreek-e-Taliban Pakistan was formed in the tribal areas of Pakistan bordering Afghanistan, known as FATA (Federally Administered Tribal Areas). These so-called Pakistani Taliban were distinct from the Afghan Taliban, who were engaged in a fierce struggle to drive out foreign forces from Afghan soil. The Pakistani Taliban, espousing a weird form of Islam, had just one aim: to carry out terrorist activities in Pakistan and to destabilize the country. They were surrounded on three sides by Pakistan’s military, leaving the porous border with Afghanistan as the route from where armaments, tools of terrorism and finance flowed in freely. Numerous reports in Pakistan’s press named the backers as the American CIA and Indian RAW.

Pakistan’s incompetent federal government failed miserably to control the growing influence of Pakistani Taliban, who became the effective rulers of FATA within two years. Emboldened by their success, PakTaliban moved further into the neighbouring province of Khyber Pakhtunkhwa (KPK), especially Swat, and forcibly imposed such perversions as banning girls’ education in the areas under their control. By the time Malala was 11 it was the writ of PakTaliban that prevailed in Swat.

What was life like under PakTaliban? BBC Urdu had a brilliant idea. Get a Swati student to write a regular blog! A 16 years old girl volunteered but withdrew under pressure from her family who feared reprisals from PakTaliban. Ziauddin, however, offered up 11 years old Malala as the blogger. She was deemed too young but was eventually accepted as the fear of the ruthless Taliban had driven away more suitable pupils. On 3/01/2009 Malala’s first blog in Urdu appeared at the BBC Urdu website under the pseudonym Gul Makai (Sunflower). She wrote several blogs, the last one on 12/03/2009. With great courage she gave a candid account of her life in Mingora (the main town in Swat) under PakTaliban occupation and wrote passionately about girls’ education.

From that point Malala’s rise to fame was rapid as a US journalist made a New York Times documentary about her and she gave interviews in print and on television. In July 2009 Richard Holbrooke, US president Obama’s special representative for “AfPak”, had a meeting with the twelve-year-old! By December 2009 the identity of Gul Makai, the young BBC blogger, had been revealed in articles about Malala. PakTaliban issued numerous death threats to her but Ziauddin paid little heed, possibly because of the action of Pakistan Army in the summer of 2010 to drive PakTaliban out of KPK. In July 2012 Malala gave a speech at National Marxist Summer School in Pakistan.


The area commander of PakTaliban, Mullah Fazlullah, gave the order for her assassination. Fazlullah is currently the leader of PakTaliban and lives across the border in Afghanistan. He is said to have the support of Afghan, American and Indian secret services. On 9/10/2012, aged 15, Malala was shot at close range by a young Talib as she travelled home in her school bus. One bullet entered the left side of her forehead, travelled down her face and embedded itself in her shoulder. After initial operations in Pakistan she was sent to the Queen Elizabeth Hospital in Birmingham for intensive rehabilitation.

On 15/10/2012 a famous visitor came to see Malala in her hospital bed. It was Gordon Brown, the former British Prime Minister who was once close to America’s Obama, and now acted as the UN Special Envoy for Global Education. He lost no time in launching a petition for children’s education under the catchy slogan “I am Malala”. He is thought to have put forward the name of the anti-Pakistan, anti-Islam journalist Christina Lamb to ghost-write Malala’s autobiography in English. Predictably, when the book was published in October 2013 it had the title “I am Malala”! This book is notable for the disagreeable way Lamb has exploited a child by slipping in comments in Malala’s name which would have been beyond her comprehension. As an example, Salman Rushdie’s infamous book “Satanic Verses” is mentioned in the context of freedom of expression even though Muslims worldwide were deeply hurt by the perversity of Rushdie in deliberately abusing and ridiculing what the Muslims hold sacred and dear.


The PakTaliban have reiterated their death threats to both Malala and her father. In my opinion most Pakistanis tend to see Malala as an idealist who is now virtually a willing prisoner in the hands of western politicians. She will be used for their political ends as much as possible and will be discarded eventually as her Marxism or her Islam are seen as insurmountable obstacles. Her Nobel Prize for Peace, too, is seen in political terms for two reasons: firstly, Malala has done nothing for regional or world peace and, secondly, to make the prize palatable to India she had to share it with a virtually unknown Indian.


Malala is growing up into an assured young woman of great dignity and charm. So far she has coped with her fame with no trace of arrogance and self-importance. May Allah’s Grace and Mercy accompany her in her life.

For an account of foreign powers' anti-Pakistan conspiracies using Tehreek-e-Taliban, Pakistan as the destabilizing force, see the following blogs:

Posted by Sakib Ahmad at 8:01 PM No comments:

Sakib Ahmad
United Kingdom
Coming from the East and living in the West, I now belong to neither. Everywhere I have observed so much intolerance and an inability to understand each other's point of view that I have come to consider 'nationalism' as an evil. I perceive divisions of East and West as artificial because they create needless strife and intolerance in the world. The whole human race ought to live in harmony, sharing knowledge and experiences while avoiding harmful nationalism. Knowledge and wisdom, whether of the East or the West, are my heritage as a human being. As a ‘citizen of the world’ I see myself as a tolerant Muslim in accordance with Quranic precepts. I have learnt much from exposure to western knowledge and culture, which has - surprisingly? - strengthened my own roots in Pakistani culture and Urdu, the language of Iqbal and Ghalib. On Twitter: @RealandIllusory